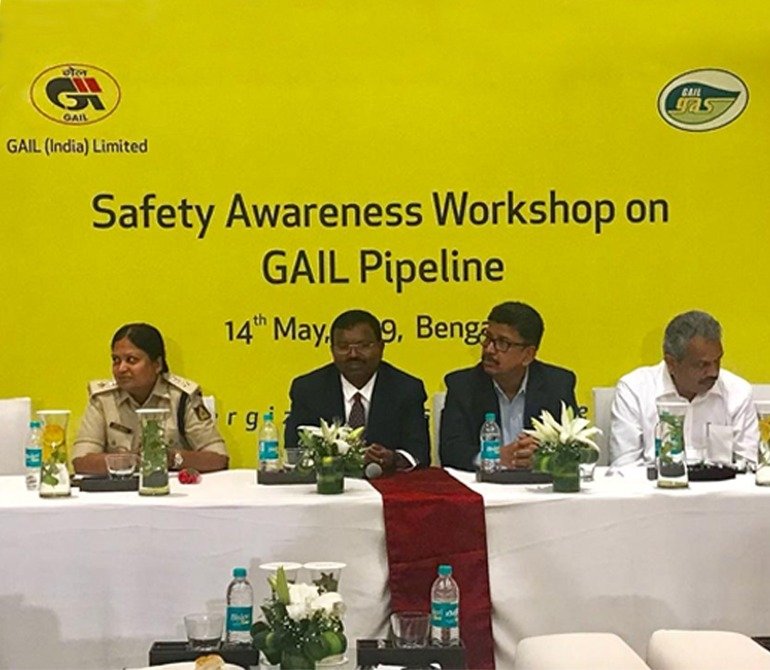 In order to create awareness regarding safety measures for the Natural Gas pipeline network in Bengaluru, a workshop was organized here which was attended by top State Government officials from Administration, Police, Fire and Safety of Bengaluru, GAIL (India) Limited, GAIL Gas Limited, infrastructure players of the city, civil amenities bodies like PWD, Water Board, telecom operators and media persons.

Shri P. Murugesan, Executive Director, GAIL (India) Limited briefed about the safety measures undertaken for the distribution network system of City Gas and said GAIL Gas Limited is fully geared up to monitor the operation and maintenance of the entire network of natural Gas pipeline system on round the clock basis.

Shri Vivek Wathodkar, Chief General Manager, GAIL Gas Limited, said as a standard practice, the company installs safety markers while laying the pipeline with instructions about “Dial before Digging” and conduct line patrolling regularly. He added that there is an utmost need to follow safety guideline before starting any digging activities in the name of public utility services. Of late, however, there has been a rise in different cases of gas leakage due to unauthorized third party interventions of different public utility appointed contractors and agencies which have undertaken digging and excavation works recklessly without permissions or not following safety guidelines.

GAIL Gas is also conducting an exclusive safety awareness program for public utility agencies. With the help of various agencies, it has developed a Standard Operating Procedure (SOP) for laying of other utilities along Gas Pipelines and circulated to all utility agencies. The local police are also supporting GAIL Gas Limited in curbing unauthorized excavation along Pipelines. In order to sensitize public at large, the company has also published Public Notices in the number of popular newspapers about the safety of Gas Pipeline.