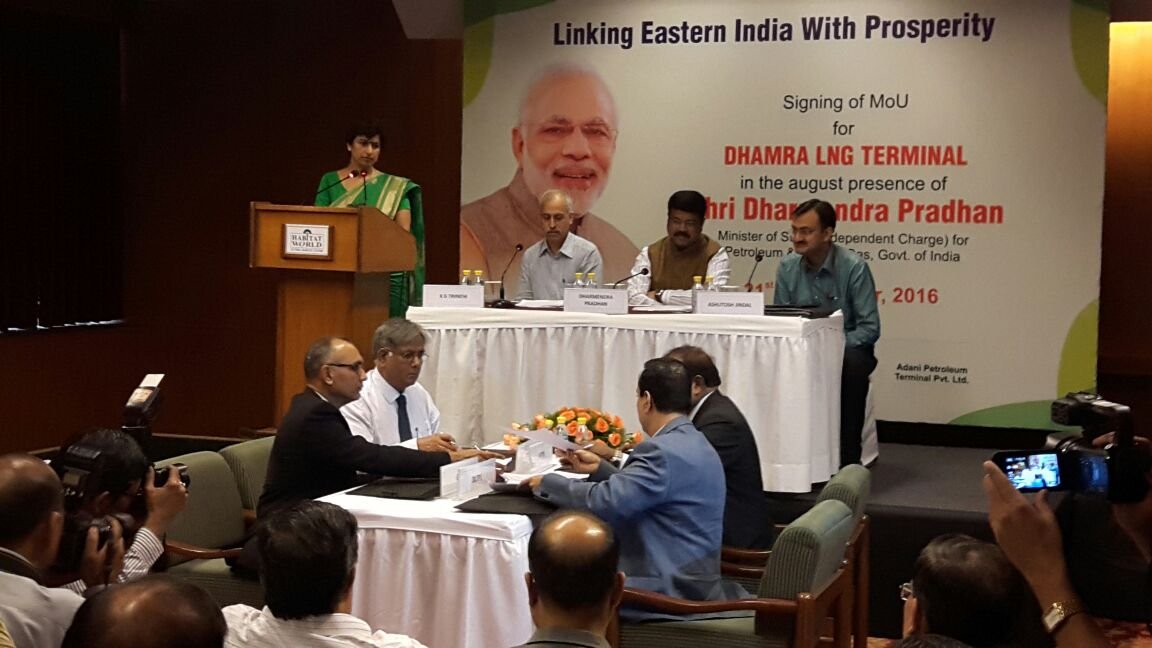 The development comes in the backdrop of Government’s consistent focus on undertaking welfare and growth measures in eastern India so as to bring this hitherto underdeveloped region into the economic mainstream of the country. Prime Minister Narendra Modi has maintained that India cannot develop till the eastern part of India develops.

Presently, the states in eastern India viz. Odisha, Bihar, Jharkhand and West Bengal are not able to get the benefits of natural gas in sectors like Domestic, Transport, Industries etc., as the region does not have gas infrastructure by way of LNG Terminals and cross-country gas pipeline grid. The LNG Terminal at Dhamra would provide the potential customers in these states a clean and economically viable alternative which will also help in reducing the carbon footprint. This will also provide momentum to the economic growth of this region by attracting new industrial projects.

The LNG Terminal would also meet the gas requirements of three oil refineries of IndianOil situated in Barauni, Haldia and Paradip. The three fertilizers plants at Barauni, Sindri and Gorakhpur which are being revived by Govt. of India will also benefit from this terminal. The natural gas from the terminal would also be supplied to various City Gas Distribution networks coming up in eastern India, which in turn would cater to the requirements of piped gas for households, CNG for automobiles and clean fuel requirements of commercial establishments and industries. It is, therefore, expected that once operational, Dhamra LNG terminal will emerge as a bridge to prosperity for the entire eastern India.

Meanwhile, in another historic development earlier today, Cabinet Committee on Economic Affairs approved Capital Grant of 40%, amounting to Rs. 5,176 Crores over 5 years, for Jagdishpur-Haldia and Bokaro-Dhamra Pipeline (JHBDPL) project, which is being implemented by GAIL (India) Limited at a total capital outlay of Rs. 12,940 Crores. This is the first time ever that Govt of India has extended Capital Grant to a Natural Gas pipeline project.

The 2,539 km long JHBDPL is expected to be completed by December 2020 and will connect UP, Bihar, Jharkhand, West Bengal and Odisha. The project will also see City Gas Distribution (CGD) networks being set up by GAIL in 7 important towns in eastern India, namely, Varanasi, Patna, Ranchi, Jamshedpur, Kolkata, Bhubaneshwar and Cuttack. The JHBDPL gas pipeline will be used for gas supply to 3 fertilizer plants in eastern India, namely Barauni, Sindri and Gorakhpur.

GAIL awards contract to set up one of...