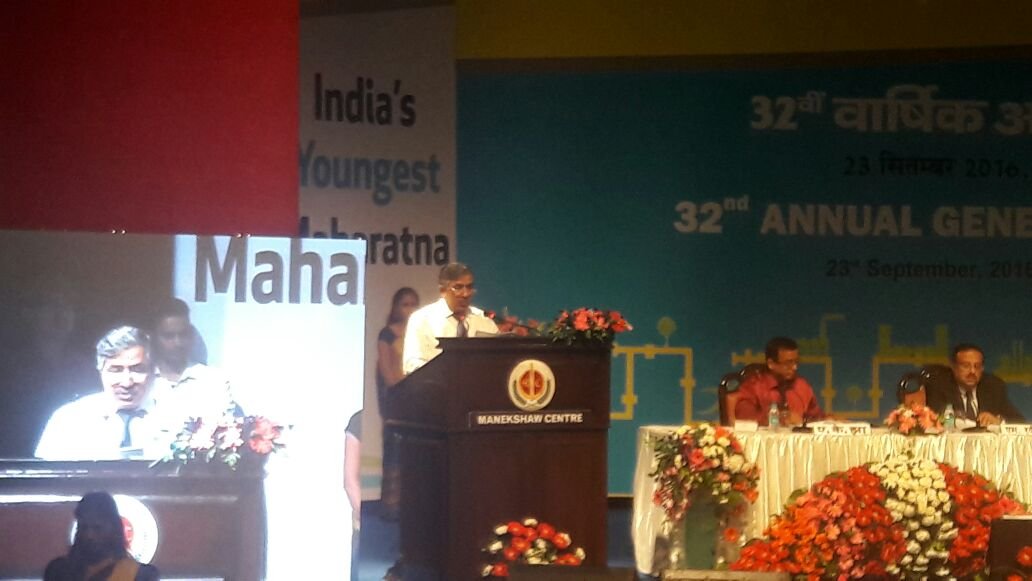 Thank You for joining us for the 32nd AGM. It is indeed a pleasure to extend you a warm welcome on this occasion.

In the financial year that culminated, Your Company also worked towards increasing utilisation of pipeline capacity by engaging with multitude stakeholders to enlarge scope of natural gas in India’s energy basket. Challenges faced in marketing long-term LNG/RLNG portfolio due to decline in LNG spot prices were successfully resolved with upstream supplier, averting a payment crisis along the value chain. GAIL also stabilised commercial operations of the expanded capacities at the Pata petrochemicals unit.

In this context I take this opportunity to rather share developments that encourage us to re-model our business operations for staying relevant.

Global economy continues to struggle  with concerns of dwindling aggregate demand growth. A steady growth of economies could only be confirmed with moderation both in volatility and downward pricing pressure on commodities.

India has been maintaining momentum even in the midst of a stressed-up global macro environment. Key reforms led by GST implementation shall spur consumption led growth. Projections by diverse institutions indicate India is poised for a GDP growth of over 7.5% in the next fiscal year too.

Government have been steadfast in expanding natural gas based economy. Numerous policy measures were initiated during the past one year for driving consumption of natural gas. The e-bid RLNG mechanism for power sector has ensured expansion of the market opportunity by over 6 MMSCMD. The need of utilising gas based power due to clean energy imperatives could be a key driver of growth for gas in the power sector.

The CGD companies are re-shaping business strategy to expand retail marketing of gas on the back of a gas allocation priority accorded by Government of India to the CNG and domestic PNG segments. Emphasis has been on rapidly expanding connectivity in Bengaluru, with state-of-the-art technologies being taken up on a priority, and the progress has been impressive. With augumentation of  gas supplies to Hyderabad City, the JV company operating in the region has renewed its efforts to improve connectivity across segments that potentially reside on its network. CGD companies in other metros have been gaining traction and I am happy to share that the IPO of Mahanagar Gas Ltd. has received an overwhelming response, reflecting immense confidence on the promoters’ earnest endeavours in nurturing these enterprises. Efforts under the sector have yielded an unprecedented volumetric growth of about 15% in natural gas consumption.  Given the emphasis and focus it is expected that the sector shall continue to maintain promising growth.

Before I go any further, I am glad to share with you that Your Company has been accorded by the Cabinet Committee of Economic Affairs (CCEA) on 21.09.2016, to undertake 2539 km long Jagadishpur-Haldia-Bokaro-Dhamra pieline project, along with the development of seven CGD projects at major locations enroute- Varanasi, Patna, Ranchi, Jamshedpur, Kolkata, Bhubaneswar and Cuttack by December 2020. This project will be undertaken at a cost of about Rs. 12,940 crore with an unprecedented support of Government of India by way of capital subsidy to the extent of 40% of the project cost. I am also happy to announce that an MoU with Dhamra Port for jointly developing an LNG terminal of 5 MMTPA capacity was signed on 21.09.2016 with GAIL’s capacity share at 1.5 MMTPA.

This is also to share with you that the Sabine Pass terminal has been commissioned earlier during the year and exports data suggest India being the third largest recipient of train 1 LNG cargoes. Based on the project schedules, India should be receiving its share of contractual cargoes from early 2018. GAIL is working towards charter hiring of ships in step with the LNG off -take schedule.

In the Gas Transmission business, the customers have a choice, depending on the type & source of gas, to either have contracts for end to end service through door delivery contracts or a-la-carte selection for shipping their gas volumes. This is akin to the international practice of commodity delivery services under DES/FOB etc., and is driven as per consumer choice and purpose.

GAIL has been actively involved in expanding its market share in the re-gas tolling capacity segment- i) by focussing on converting Dabhol terminal to an all-weather port with the break-water in place, ii) by way of engaging with the Government of Andhra Pradesh to shape Kakinada FSRU project into a reality by early 2018 and iii)  by joining Dhamra Port for developing re-gas capacity to feed RLNG into Jagdishpur-Haldia-Bokaro-Dhamra  pipeline from Eastern side.

The Natural Gas sector is  on the cusp of  an interesting era as more volumes  are expected to roll out under various types of contract structures of diversified indexes, re-gas capacities are doubling-up, pipelines are penetrating the Eastern and Southern parts of India and CGD networks are expanding on a pan-India basis within the next 3-5 years.

It is a matter of pride and privilege to share with you today, that the combined ethylene capacity operated by Your Company and its subsidiary is over 1 Million tonnes per annum and is the largest in India.

The segment is moving towards maintaining profitability despite  severe cut-back in domestic allocation of gas and innovative solutions of feedstock optimisation are being pursued to sustain profitable operations.

It is also a pleasure sharing with you that the project ‘Sanchay’ that we initiated during last year has been yielding significant returns in focussed areas. Substantial gains are expected to accrue within the next 24 months under the identified areas.

As shared with you, last year, the project progress of the various pipelines located at KG/Cauvery Basin and Gujarat are as per schedule. The 360 km aggregate pipeline revamp has significantly progressed in KG/Cauvery segments and are scheduled for completion by January 2017. The 450 km pipeline upgrades in Gujarat are expected to be completed by  FY 2017-18.

Your Company’s Board has also approved Vijaipur-Auraiya-Phulpur pipeline segment of 670 KM at an estimated cost of Rs. 4538 crore  which is planned for synchronisation with Jagdishpur-Haldia-Bokaro-Dhamra pipeline project.

The Jagdishpur-Haldia-Bokaro-Dhamra pipeline project is being developed with the support of Government of India to ensure the objective of developing fertilizer plants and a commercially sustainable gas based economy in Eastern India.

Digital India has been a fundamental force shaping efficient delivery of services towards making GAIL a smart utility. In this endeavour, Your Company is harnessing digital power already embedded in the systems, by laying thrust on data analytics for speedier and efficient decision making in operations. Real time information dashboards for various functionalities have been deployed and business transactions have been enabled over secure mobile applications  to ensure speedier execution.

It gives me pleasure to share with you that under extensive R&D efforts, Your Company developed a satellite based application in collaboration with ISRO for pipeline surveillance, with imaging on high resolution formats. On need basis this facility shall be expanded over networks and even for pipeline route selection in future.

Even in the gas retailing/CGD side, Your Subsidiary Company,has pioneered installation of electronic meters with digital bill payment options as an ingredient for creating smart city environment in this sector.

The company grossed Rs. 51, 614 crore in topline and Rs. 2,299 crore in profit after tax in an overall challenging context of declining domestic gas availability, curtailed feedstock supply to petrochemicals production and dwindling demand for long-term gas volumes. Although downward pricing pressure and compression in segmental margins  have impacted profitability by about 24% on a year-on-year basis, the company’s Board has recommended a total dividend of 55% of the paid-up share capital to serve shareholder interests.

GAIL has received for the 7th year in a row ‘NIL’ comments from the CAG for FY 2015-16. Your Company has always been proactive in upholding ethical standards across the enterprise in all its endeavours.

GAIL has  been recognised as the Leading PSU by Economic Times, in a study on “The Best Companies for CSR” published in October 2015, for its transformative ground work in improving lives of the under privileged, with an overall ranking of 7 among the country’s Top 10 Corporates. Your Company has touched over half a million lives through its various CSR development programmes. Our CSR program ‘Utkarsh’  has yet again delivered outstanding results with 94% of the candidates making it to top- ranked engineering institutes of the country, including the coveted IITs – the modern temples of higher learning.

GAIL is re-positioning itself to cater to the changing needs of its consumers and is focussed on attuning itself to providing consumer centric services across the natural gas value chain.

I am privileged to have the opportunity to thank you for your conviction and continued support to GAIL’s endeavours. I also extend my gratitude to the Central Government, MoPNG and State Governments for supporting and nurturing GAIL in its objectives of serving the Nation.

The year witnessed the Board being deeply engaged in shaping policy decisions for the growth of the company. I express my thanks to the dedicated team of Board members.

A dedicated and talented workforce has been a pillar of GAIL’s strength. I thank them for striving to create wealth for Stakeholders and in taking the company forward.

Thank You Ladies and Gentlemen.

PM dedicates to the Nation and lays the...